Forced ranking is a workforce management tool that compares and ranks employees’ performances relative to each other instead of against a pre-determined standard. There are no standards for measuring the performance of the employees, but the comparison is person-to-person. This method is also called as vitality curve. Measuring and grading are carried out through extensive yearly evaluations.

In theory, forced ranking improves the quality of the workforce, although this method is highly controversial in the management field.

This method gained attention in the 1980s in General Electric, commonly called the ‘rank and yank’ system. General Electric ranked the employees against each other every year, and the bottom 10% of employees were removed from the company. The method lost its scope after the downfall of Enron, which was partly attributed to forced ranking systems.

In the forced ranking, employees are divided into 3 categories according to their performance- “A” players who are the top performers are given promotions and appraisals. They constitute the top 20%. “B” players, who make up to 70%, are neither excellent nor bad in their performance. They might receive small increments and appraisals. And “C” players who perform comparatively worst makeup 10%. These employees are removed from the company. 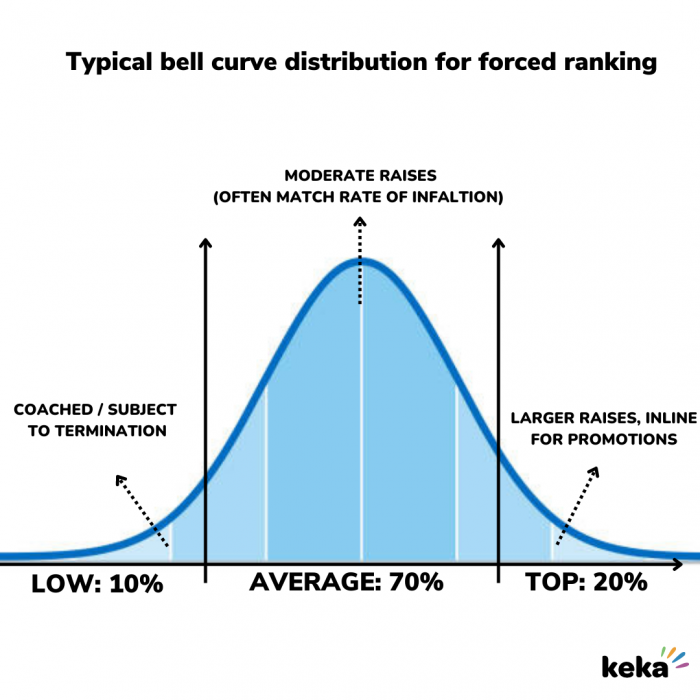 Many companies don’t publicly say they have this ranking system but still practice it. Data shows that at least 10% of 500 fortune companies use the force ranking system. Different organizations set different criteria for grading employees. For example, General Electric has 4 Es in which the employee should perform well- their energy level, how can they energize others, edge to make tough decisions, and the efficiency with which they execute the plans.

Is force ranking good or bad?

Some argue that force ranking is a good method because it allows the employer to recognize the top-performing employees and provide them with training, promotions, and appraisals. The bottom employees can be helped to improve or removed altogether, and the employers can hire better talents to better the organization.

Although the goal of this system is to improve the company’s productivity, it can create an unhealthy competitive atmosphere in the company and can lead to a decrease in morale. Many HR professionals and managers are raising red flags about forced ranking. Hence, it has got a bad reputation in the management field.