5 Steps to Define Core Values in Company and Ideology Behind it. 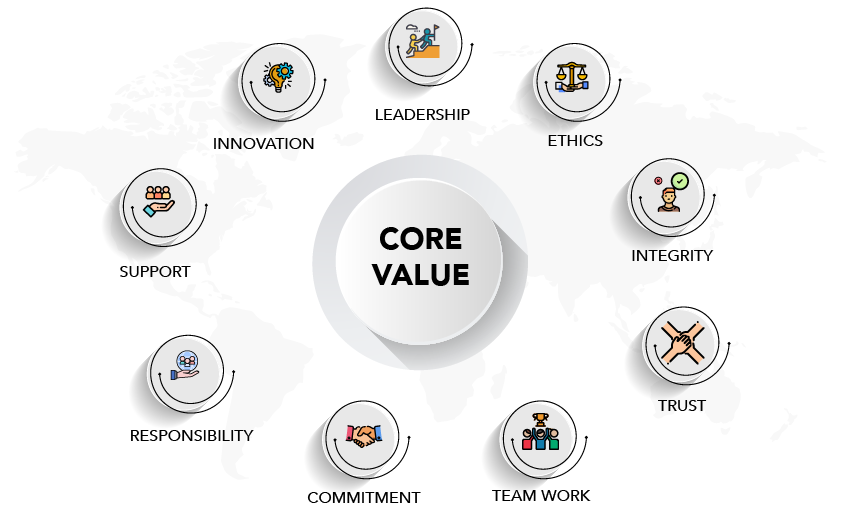 Organisations That Are Leaders In The Market Are Not Just About Their Balance Sheets, They Have An Identity And Embody Something.

Here, it is not only the brand perception that matters but also the internal health of the organization. This identity comes through the core values a company has adopted. These core values form the personality of the company and the bedrock upon which business decisions are made.

Patrick Lencioni in his classic, The Five Dysfunctions of a Team, quotes an entrepreneur as claiming that if an organization could get all the employees to row in the same direction, that organization could dominate the market, against any competition, at any given time. Core values are what help to achieve this.

What Are The Core Values?

Core values determine the priorities of an organization. They form the foundation of the company and serve to define its vision, shape its culture, and help in working towards the goal of the company. Core values are ideals and objectives in themselves.

Any business endeavor is subject to rapid changes with respect to society and technology. In this kind of volatile environment, it is the core values that become the much needed constant. Many times companies focus on the technical competencies but tend to forget that it is the underlying core values that drive the company towards the sustained success it desires.

When Tony Hsieh, the founder of Zappos was asked what he would do differently if he were to again start the company from scratch, he said that he would come up with core values from day one of its inceptions. Core Values of a company are like the sails of a boat, giving it direction and purpose.

How does one identify the core values of a company is the next big question. The important thing to remember here is not to just copy-paste a competitor’s core values nor is it plucking ideas out of thin air and noting them down. The core values need to be a close fit for any organization and should be aligned with the goals of the company.

Here is a short layout for identifying your company’s core values.

Careful thought needs to go into setting up a team that must come up with the core values that will become the identity of the company. Having representatives from across the company, that is, from various departments and from different hierarchical levels would be a good idea.

The team chosen for this exercise should all be on the same page, committed to drafting and implementing these values. They should be able to brainstorm, compromise, take a step back, assess, reassess, and above all believe in the final outcome.

This step would involve coming up with several ideas and then narrowing them down to the few most important ones that are the right fit for the organization. Keeping the company’s mission statement in mind would serve well to bring out core values best suited.

It would involve all of the team members who have been put together for this purpose to individually list out what each think could be core values for the organization and then making sense of all the input.

This is a time-consuming process and would do well not to be rushed and best to be handled over a few meetings giving room for deliberation and discussion.

Core value suggestions should also come from the top rung of management since it’s their vision which will steer the company forward. They need to do a soul search and come up with values that resonate with the company’s path in the years ahead.

It is important that the core values are not too many in number and can be remembered easily. This step would require all collected data to be sorted and parsed. Here the affinity mapping exercise which involves grouping similar ideas into about 5-7 groups in order to make sense of all the data may be useful.

Affinity mapping helps when there is a large amount of data available and one needs to find coherence and correlations in it. After this is done, the similar ones can be merged, duplicates deleted and the inconsequential ones left out.

Many companies have anywhere between 5-10 core values. Therefore while arriving at the final core values it is necessary to take stock of the fact as to whether they encompass the vision of the company and whether the employees can be held to these values.

Once the values are finalized, it would be best to set aside time to discuss what each value means to all employees and to the organization as a whole.

Rolling out the compiled list of values to the entire team is an exercise aimed to familiarize all employees with the core values of the organization. A brief explanation about how the particular values were chosen with respect to the company’s goals will go a long way in maintaining employee loyalty and building brand value.

It is important for all the employees to understand how each value works for them individually as well as for the company since it is highly likely that even the most well-meaning employee may misunderstand or misapply a value.

Once defined core values should be visible in every aspect of company operations, from internal reviews, during sales and marketing pitches, integration into hiring practices, orientation, onboarding, and so on.

The company’s well-being lies in its employees and the company would do well to highlight those employees who are examples of the values to others to appreciate and emulate.

The Mars Group Exercise developed by Jim Collins is an often-used tool to help arrive at the core values of an organization. The exercise involves identifying 5-7 people, known as the Mars Group, who will articulate what the final vision for the company will be.

This group of chosen people will individually note down what they think are the core values of a company.

The ideas so gathered will be deliberated upon and distilled to arrive at the core values which will resonate with the company’s mission. Once finalized the values will be communicated to all the employees of the organization

Ideology Behind Setting Up Core Values In An Organisation

The values laid down by the company become the crux of any decision, a tool that helps to arrive at a suitable decision. A decision which embodies most core values will work to keep the image of the company in the market intact

wherein potential candidates and employees are able to judge the benefits of working with a company with strong values. It is these values that give a feeling of security to everyone associated with the company.

During meetings and reviews, placing the core values at the forefront helps as a self-check to assess whether the ongoing work is aligned with the values laid down. This gives a feeling of security to the employee and in turn, raises productivity and performance.

When a company has its core values in place and up for everyone to see, it gives an opportunity for the world to see how the company operates. If people like what they see, they will speak about it to others thereby providing word of mouth promotion.

Every business is different and would tend to have different core values. However they may be worded, there are some basic principles that would be alike to all.

A company that respects all its employees in an unbiased manner goes a long way in gaining the trust and commitment of its workforce.

Being innovative and not just imitating competitors will sustain the growth and success of the company.  Setting up strong core values will be a constant reminder in this process

The thirst to constantly improve is a sure step in achieving success. Providing a dynamic platform for employees to constantly work on their creativity and skills and not just resting on their laurels will take the company far.  Core values are the backbone of this thought process

The importance of core values is aptly summed up by Edward de Bono, the famous author, and inventor, stating that “Effectiveness without values is a tool without a purpose”.

Articulating a company’s core values will enhance the company’s market position and differentiate it from its competitors. In this light, it becomes extremely pertinent to define the core values of an organization at the stage of the genesis of the company itself.

Thoughtful well-implemented values serve as the foundation for a positive, high-performance culture as they constantly guide the company and its employees to function within an ethical and ideological framework